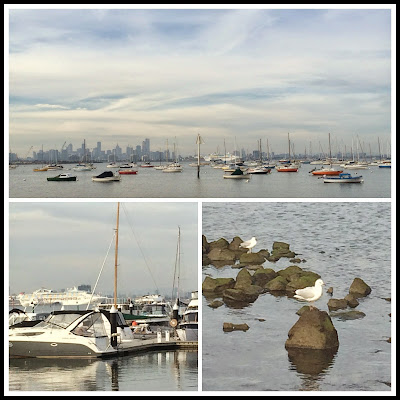 Gorgeous, isn't it?  With a view like this, the overcast sky didn't matter at all!  The city you can see in the background is Melbourne and my BFF and i were strolling along the Williamstown foreshore on the other side of the bay Sunday afternoon.  A leisurely walk (or for those in our FitBit group, a fast paced romp clocking up steps) admiring the boats, the gulls, the large cruise ship and some rather expensive real estate. Williamstown was the original sea port of Melbourne in the mid 1800's and after many years of being an industrial wasteland it has evolved into a genteel suburb of a original cottages and terraces, glass fronted mansions, a maritime precinct, public parks with walking and bike paths for all.  Weekends see the main esplanade of restaurants and the foreshore packed with both locals, city dwellers arriving by water taxi  and people like us who visit from the outer burbs.  The cruise ship in the top picture is the Sea Princess on its first stop out of Sydney and bound for Perth via Margaret River.  A leisurely 7 day cruise. 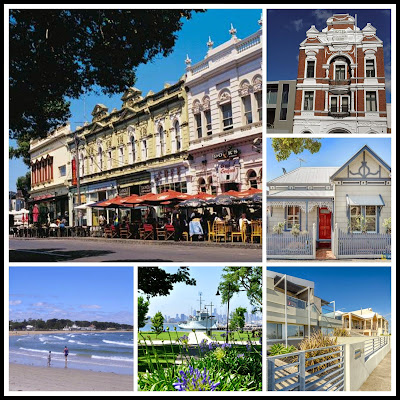 We took our time driving back along the bay through Altona (quick stop for an ice cream) looking at houses, both admiring and critiquing as only those who are addicted to watching  home renovation and real estate programs can do.

Speaking of renovating, the long drawn our Arch of Bob (as it has become known) is nearing the end.  Of course the arch i refer to is the one between Tom's two bedrooms and it seems to have morphed into a long term project rather than a quick weekender.  A coat of paint went on this weekend but not before much sanding of grout and plaster with the ensuing mess transported throughout the house.  Can you guess by who? 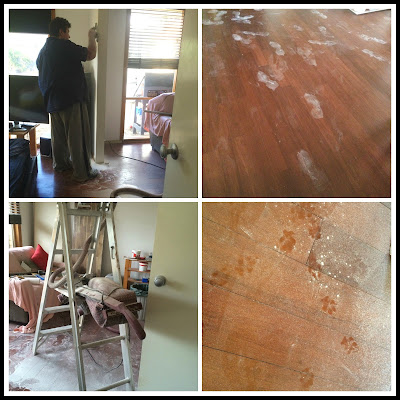 I seriously must have the patience of Job.  Even Tilly is in on the act.  I must have washed those floors three times in one day.   Rob was like the Abominable Snowman covered in plaster dust from head to toe.  "Stand Still" for goodness sake!

I seriously had to undertake some therapy so i went out to the garden to fetch a pumpkin.  This is my first crop and i am justifiably proud, so allow me a little showing off, if you please...... 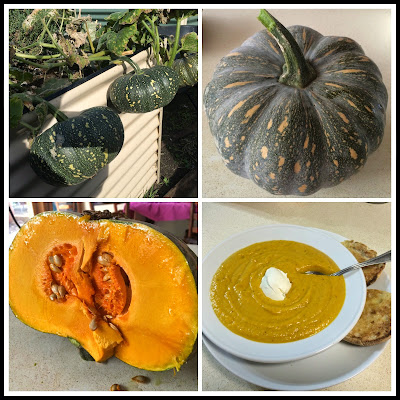 The one most in danger of falling off was huge and so i split it with my BFF.  We both made soup last night.  I oven roasted mine with onions and then pureed them with a little (homemade) chicken stock.  Bring it to gentle simmer and add cream (either normal, sour cream or coconut cream), salt & pepper, nutmeg and stir to combine.  Yum Yum Yum.

Work is still go go go at the moment and so nothing extraordinary has happened.  I would love to do some more workshops but the home projects beckon.  One day, one day........ they will be done but in the mean time we will enjoy the journey and learn some new skills, like plastering!


Thanks for Visiting Living In The Land of Oz
Posted by Unknown at 04:48 8 comments: 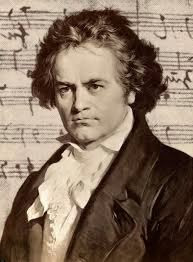 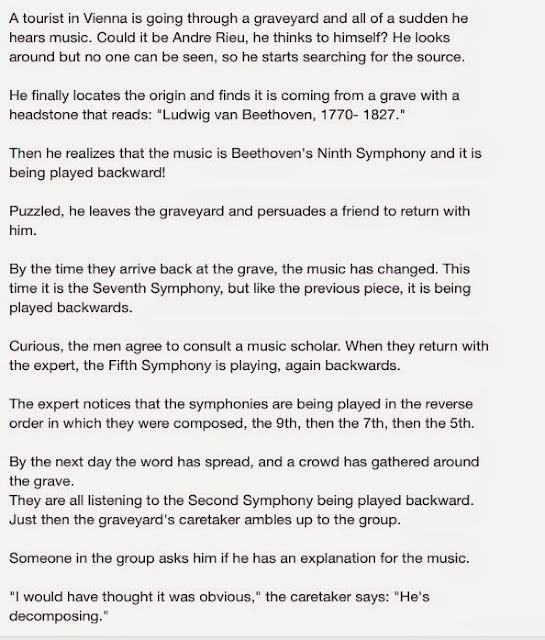 The above joke had our family rolling with belly laughter.  So unexpected yet obvious.

I'm enjoying the jokes Noelle is sending from afar.  She is visiting her sister in Florida for a while but still keeping me laughing.


I couldn't find my keys. I quickly gave myself a personal "TSA Pat Down."
They weren't in my pockets.  Suddenly I realized I must have left them
in the car. Frantically, I headed for the parking lot.  My husband has
scolded me many times for leaving my keys in the car's ignition.  He's
afraid that the car could be stolen. As I looked around the parking
lot, I realized he was right. The parking lot was empty. I immediately
called the police. I gave them my location, confessed that I had left
my keys in the car, and that it had been stolen.
Then I made the most difficult call of all to my husband: "I left my
keys in the car and it's been stolen."
There was a moment of silence. I thought the call had been
disconnected, but then I heard his voice, "Are you kidding me?"     He
barked,   "I dropped you off!"
Now it was my turn to be silent.  Embarrassed, I said,   "Well, come
and get me."
He retorted,   "I will, as soon as I convince this cop that I didn't
steal your damn car!"

An old geezer, who had been a retired farmer for a long time, became very bored with retirement, so he decided to open a medical clinic. He put a sign up outside that said: "Dr. Geezer's clinic. Get your treatment for $500; if not cured get back $1,000."

Dr. "Young," who was positive that this old geezer didn't know beans about medicine, thought this would be a great opportunity to get $1,000. So he went to Dr. Geezer's clinic.

This is what transpired:

Dr. Young gets annoyed and goes back after a couple of days figuring to recover his money.
Dr Young: "I have lost my memory. I cannot remember anything."
Dr. Geezer: "Nurse, please bring medicine from  box 22 and put 3 drops in the patient's mouth."
Doctor Young:  "Oh no you don't, that is Gasoline!"
Dr. Geezer: "Congratulations! You've got your memory back. That will be $500."


and ain't that the truth!

Thanks for Visiting Living In The Land of Oz

Email ThisBlogThis!Share to TwitterShare to FacebookShare to Pinterest
Labels: Jokes

Here I Am, Not Far Away, Just Hibernating 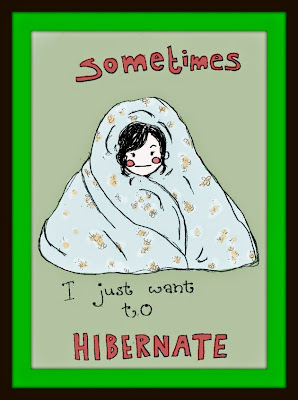 Gosh, it has been awhile since i wrote a post.  Is this what they call writers block? Have i committed the cardinal sin of blogging and been absent for so long that I've lost my readers? Truth is that nothing much has happened that was worthy of writing about.  "Hasn't stopped you before", i hear you say from afar.  Perhaps the autumn chill that has finally descended upon us here in Melbourne has sent me into hibernation. Now wouldn't that be nice?.  I think i could crawl into a nice warm cave and sleep for the winter.  Even better, when i finally came out I'd be much much slimmer.  Well rested and looking good.  Bonus!

You may have noticed me popping up in your comments here and there but in general I've been pretty offline. I've read some books and watched a shocking amount of recorded home renovating and cooking programs in the evenings. Today, however, the autumn sunshine appeared and woke me up.  I've been playing outside in the garden. Gosh it feels good.  I truly haven't been out there for weeks and look what i found. 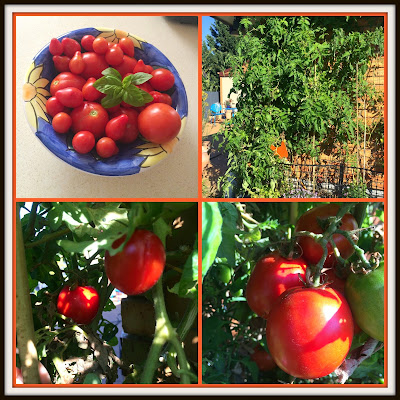 Can you believe it?  Tomatoes in May.   I've broken my own record and have now been picking my own tomatoes from early December to mid May.  6 Months - Crazy!.  As Gavin from Greening of Gavin pointed out, i have my own little micro-climate going on out there.   I ate some sliced on toast with salt flakes and pepper and it was an explosion of flavour.   The remaining plant on the back wall of the house is full of green ripening tomatoes and even flowers reaching to the eaves.  The solar system tells me I'm generating 3kW of power so I'm washing my dishes and clothes for nothing. 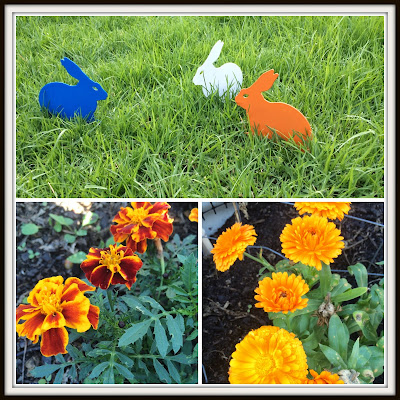 These flowers are self seeded and certainly were not there a few weeks ago.  I'm definitely a lazy gardener. It looks after itself.  I am great at growing grass though and my low maintenance bunnies seem to enjoy it.

Two weekends ago i had the pleasure of two munchkins for the weekend.  Maison and Chelsea live on the other side of the city now and our visits are too infrequent.  I pinched them for a weekend of cuddles and kisses.  Nope, i haven't started pinching their cheeks yet like some ole spinster but close enough.  Maison and the boys (sorry, my men) went off to see the Avengers on Saturday while i took Chelsea to KMart for some winter clothes for her birthday.  Can you believe that she is turning 6 and just going into size 4.  Tiny little miss but one with attitude and the confidence of an 18 year old.  The boys usually hang together while Chelsea and I get some girl time. 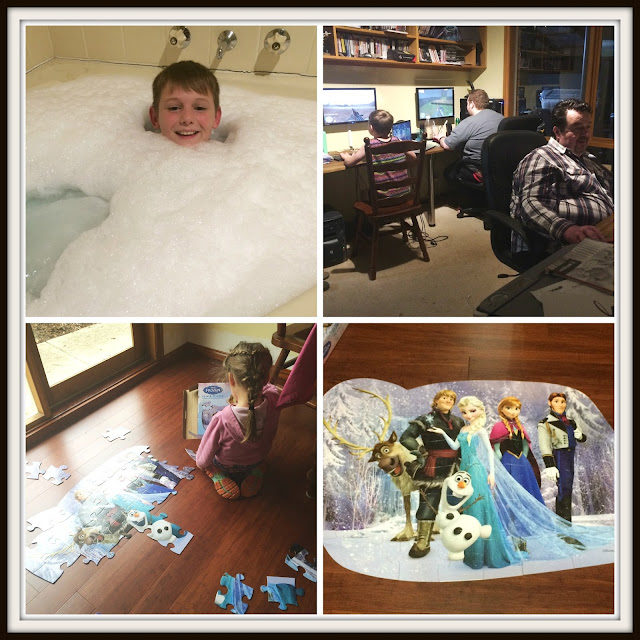 Chelsea, who doesn't eat eggs, decided she loves my "puffy cakes" otherwise known as quiche.  On Sunday Tom drove us down to Werribee South foreshore and while the sausages were cooking i made French Toast (bread soaked in egg).  She ate so many that she didn't want any sausages.  Hmmmm  i guess Chelsea does eat eggs, just don't tell her. 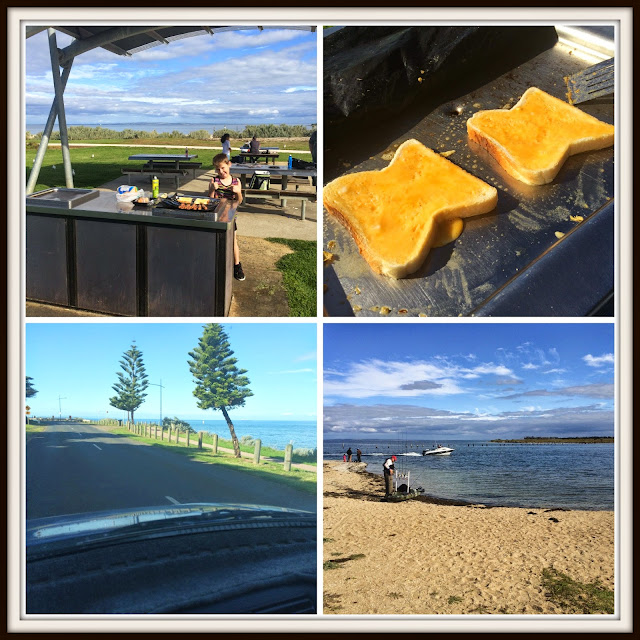 We had a lovely time watching the kids roll down the grassy slope with the other children.  I think the little Muslim girls, covered from head to toe, were better protected from grass rash than the others but i was worried about grass stains on their white hijabs.  Maison was scratching for hours.  We tore up the remaining bread and fed the seagulls creating a huge flock of noisy and competitive birds.  Such fun for all. 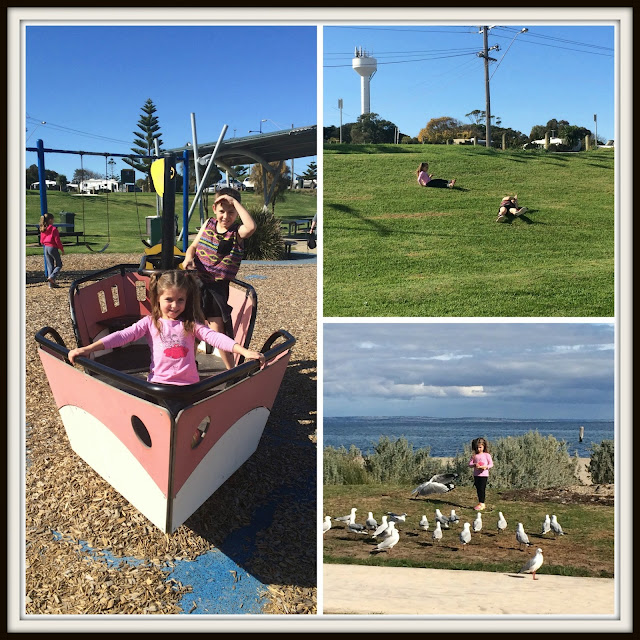 Last weekend my Bestie and I joined the throng and attended the AFL's annual Pink Lady Match in support Breast Cancer.  It was a lovely outing on our own and I enjoyed our train adventure.  She travels to the city every morning and night on crowded trains and so I'm not sure she was so enthused. I'm not a footy supporter (she is a Collingwood supporter - need i say more) but i do love attending a game at the MCG (Melbourne Cricket Ground). So much atmosphere.

There was a minutes silence where i remembered my late sister-in-law Bellie and also a banner through which 300 Mums, chosen from 1000's nominated, ran through all dressed in pink poncho's.  We were given small LED torches that had a pink filter and when they turned the lights off it was amazing.  I think i equally enjoyed the company and just moving around the city late at night.  It felt strangely youthful, like we should be checking into one of the nightclubs for a boogie and a few cocktails.   Ummm  the fact that i said the word "Boogie" should be a hint that i am anything but youthful!.

This weekend we've been busy de-cluttering for a hard garbage pickup.  I don't know why we bother as it usually disappears before the appointed day (Wednesday).   Tom's old mattress, an unused sun lounge and a broken office chair have gone one way and an old bookshelf with 50 coats of paint that i was planning on stripping went the other.  I wonder if someone wants my green waste because that's about all that's left along with the old oven.

Rob and I went to see the movie Mad Max - Fury Road on Saturday night. 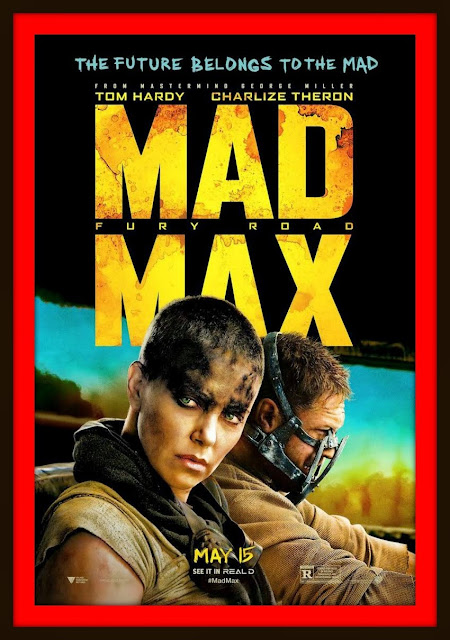 I know, you are surprised aren't you.  Surely that couldn't be my taste in movies.  Well normally I'd have to agree with you but Mad Max is kind of an Aussie thing.  I saw the first movie back in 1979 and i can tell you that George Miller has lost none of his touch.  Its my opinion that this one was the best.  My eyes were like saucers and i don't think i blinked once throughout the movie.  I was leaking tears without crying.  Such an avalanche of non stop action.  Thank you Bell for a the Village Card Christmas gift, the whole night cost us nothing. 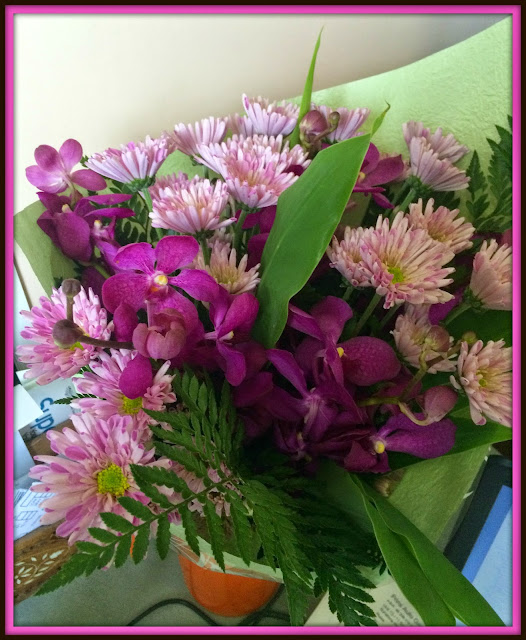 I'm loving these flowers i was given at work last week.  No reason, they just thought i needed them.  I did.