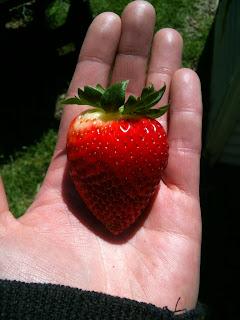 Down here in Victoria, we've just had what for many is a four day weekend.  Tuesday is Cup Day, a Public Holiday in celebration of the race that stops a nation, The Melbourne Cup. I couldn't care less about a horse race, truly.  Since its so close to the weekend most businesses (mine included) schedule RDO's or Leave on the Monday to give everyone a good break in the run up to the Christmas rush.  For some strange reason, everyone seems to think they can wait till the last minute to order a switchboard that takes 4-6 six weeks to build and expect it in 2 for delivery before Christmas.  December is usually bedlam at the factory so a rest is warranted.


I've enjoyed a busy few days off and spent the first three days working my butt off (along with Hubby) decluttering the house.  Its a big job.  We have been here for 18 years and STUFF accumulates.  Ive spoken before of the room shuffle that's going on to allow two bedrooms to become one big one for a growing teenager and its taking a while to achieve the change over.  To move a bedroom (that's packed) to an office (that's packed) and for it (the office) to then move to a study (that's also crammed with stuff) requires lots of throwing away, giving away, moving a piano, a new bed to be purchase (double) and then new custom desks to be built (cue hubby the handyman who has some great ideas).  Serendipitously, someone mentioned needing a single bed this afternoon and so the old one (which is a pretty nice chocolate wooden one) has found a home too.  Gosh, I'm cooking with gas at the moment.

I first had to empty another wall unit full of videos (yes, really) and a collection of memorabilia from holidays (no more souvenirs, they are banned) and various boyhood collections of remote cars, sporting trophies, signed basketballs, model trains and ships, and all the stuff that will end up in his wall unit (hubby yet to build) in his big room.  Tom's has been pretty good really as most things i asked "what about this" he said "chuck it".


The bottom middle cupboard and the bottom left hand were stuffed full of old toys in various boxes that were out of sorts (which happens with kids) so there was a big cull to the opp shop and friends and all the remaining toys were sorted and boxed for visiting children.  Lots of Lego, cars with road mats and a pretend McDonalds with all the noise affects like fryers, hotplates and drink machines and plastic ingredients to make burgers - almost like the real thing. LOL  It usually comes out first.

Well, do you think i stopped there.  Nope, i was on a roll and my sister came over so she got roped in too.   Rabidlittlehippy posted about all the sewing she was doing using fabric which came from old linen.  Check out the cute little sunfrock made from a pillow case - seriously frugal.   Link    That sent me to my linen cupboard.  I didn't take a before photo.  I didn't dare as my reputation for being organised would have been shot.  Truly a disaster.  Not any more......

Its is truly amazing how organising things makes you feel so light.  I think its just a relief that for at least in one area of your life, you are sorted.  Lets see how long this lasts.  At the moment i smile everytime i open the doors. Cheap Thrills.

Also in the study area being cleared are two book shelves which will soon become horizontal shelving.  In order to get two desks on each wall (like a galley on either side of the window) we are mounting the PC screens onto the wall using folding backets and then above that the two bookcases (we have had forever) laying sideways.  Genius.  We were going to give them away.  More on this area in a later post.

OK, next on the list was the pergola.  This area has been used as a workshop all winter and various things (including Hubby's new gym) have been assembled and stored out here.  The paraphernalia needed to lay the bamboo flooring and to do the painting in Toms room were assembled on trestle tables and my beautiful outdoor setting (which was covered with a blanket).  It was simply a mess and took an entire day to put to rights, sweep and pressure hose down.  The BBQ had dust so thick it was disgusting.  It was so nice to wake up on a beautiful spring day knowing that you were expecting a guest for lunch and that everything was done - no last minute tidy up.   Ive declared that this is the way it will stay - all summer long.  "Hear That Boys"!!! 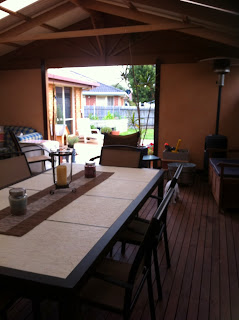 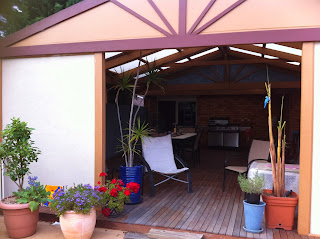 Its a big area (10m x 6m) and i can tell you that it was very much a family team effort led by Hubby to build it.  We had someone put up the frame and the roof as it has two different height peaks in the roof (a bit tricky) but all the painting and the walls and the deck was done by us.  Every one of the 3000+ nails had to be pre-drilled, nailed and counter sunk by hand.  It was tortuous so you will excuse a little bit a pride in a job well done.   There are french doors that open off the family room (see in photo of wall unit) that open up this whole area to the house. Its a great party area.

So what else keeps a girl busy on 4 days off.  I guess the usual washing, cleaning, shopping and cooking.   Tasman Meats had a special on BBQ lamb chops ($5.99/kg) and so i bought a bulk pack and trimmed the fat off, halved them and marinated in fresh rosemary and garlic, froze in batches of 8.  We had some for lunch with our BBQ today.  Casserole steak went into a Korma tweaked with coconut milk (to cool it down for me) and potato that soaks up the sauce. Three batches ready for the freezer.  Thanks to a cleaver, $3.99/kg chicken drumsticks turned into their cousins $9.99/kg Lovely Legs which were covered in Moroccan Seasoning and frozen ready for future BBQ's.  A big 2kg of beef mince ($8.99) became several batches of Taco Mince frozen in smaller portions for my sons wraps and the remaining 1kg became country beef with chopped veggies boxed up and frozen for cottage pies.  The last of the leeks taken from the garden were added to my sole rescued cauliflower, add potato, stock, bacon, pepper & salt, cooked 20 min, pureed, add corn niblets (left over from salad) and a dash of cream to make a thick chowder for tomorrow nights dinner to be served with sourdough dunking toast.

But the best was made early this morning to help soak up the flavors:

Recipe was taken from Internet.  Its not mine but i figure if i tweak it enough i can claim it.

Chicken Mince 500gm  - I used Thigh Mince as it has more flavor
Zest of 2 Lemons (this was unusual but really made it different)
50gm of Fresh Grated Parmesan
2 Tablespoons of Fresh Parsley
1 Egg
100gm (approx) of fresh breadcrumbs  (i processed Tuscan Sourdough - lots of seeds and grains)
Cracked Pepper - i added this as well as i thought it would go with the lemon.

I only slightly browned this on the BBQ plate and then lifted them up onto the shelf above while the lamb cooked with the hood down.  This way they don't get dry. 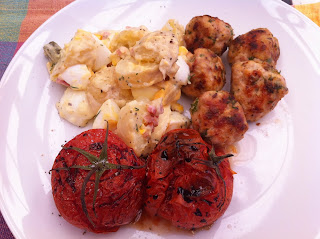 This was served with slow roasted Truss Tomatoes drizzled with a good Balsamic Vinegar and also my potato salad and Ginger Beer.  There was also the lamb with rosemary and garlic as above but i cant eat red meat so it wasn't on my plate.  Is it polite to ask if you can photograph someone else's dinner?  I'm thought of as the crazy blog lady already.  Lovely gooey truffle chocolates finished off our Springtime BBQ Lunch.   Who needs to go to the races to have a good time.

Tweak - Tonight the left over salad had leftover roasted pumpkin squished through it to add extra sweetness and flavor.  Still more left so tomorrow I'm going to add some Greek feta and have it for lunch at work.

Our Rabidlittlehippy left with a full tummy, a cupboard, a bag of linen to whip up face washes, hand towels, pillowcase dresses and probably also a bag of rags.  I have lots of baby free tomato seedlings coming up everywhere so we potted some (hope they survived the journey) and one of my lemon balm plants went for a trip as well.  I love that i can have a small part in the creation of her food forest garden.  Its going to be amazing.

Long post but it was a 4 day weekend.  Hope you all enjoyed your weekend and if you are down south of the equator that you have started on the BBQ season as well. I love the casual dining and eating outside (or inside in our case - i never know whether our pergola area is in or out).

Thanks for Visiting Living In The Land Of Oz