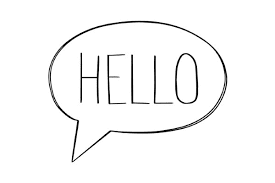 Hello, Its me
I was wondering if after all these months you'd like to read.
To go over, everything......

I should of had you at Hello, but in case i didn't and you've been living on Mars for the last few months with Matt Damon, I've just tweaked the first verse in Adele's single "Hello" and snuck in a line from Jerry McGuire, the movie, and now i feel complete.  Ha!

Its been a while.  Miss me?  Don't answer that, i might not like the answer.  There have, however, been a few comments via various forms of media that maybe, just maybe, some of you might want to hear from me.

I can feel my head filling up with stuff and so its time i starting writing again to let it all out. I've had a few of you asking if I'm OK and the answer is yes, I am.  Not sure why i stopped posting.  I've walked past the PC in the office many times with its bright shiny screen and it has hauntingly said "come on, you know you want to".  But just like my weight loss program (NOT), I've kept on walking, had another cup of coffee with a few biscuits and sat down somewhere out of its view.  Mostly, in front of Foxtel.  I seem to have disappeared into the ether that is filled with home decorating and cooking competitions, armchair travelled around the globe a few times (you bush people in Alaska are a bit strange), watched documentaries on the most obscure subjects (I'd be great at trivia night) and and........ in short, I've become a 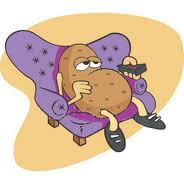 
Why do they always draw sad faces on couch potatoes.  I haven't been unhappy.  Guilty? Well yes, i have felt guilty.  There is always so much to do at work, in the garden and in the house and its this pending work that has finally dragged me off my couch and finally onto the PC to get some inspiration.

We are re-decorating our house and with Rob continuing to progress with the flooring, its finally time that I put my two cents in and started painting.  This use to be a simple task but not any more.  With my new found knowledge of design (courtesy of the Foxtel brigade) I now have so many options that I don't know where to start.  I mean, its such a big expense and time commitment that I cant just slap on any ole colour, now can I?.  It must be SHA (Selling Houses Australia) and worthy of all the hours I've already wasted watching Shayna turn the hideous and out of date into magazine worthy with the slap of a paint brush.

Yep, all of you out there peeing your pants with laughter that after all this time and effort, headaches and lack of sleep, tossing and turning thinking of colour charts, the end result is white.  Not only is it white but I've chosen a shade that is the most popular white in Australia - Antique US White for the walls contrasted that with Vivid White on the wall units, table and other bits and pieces.  How's that for imagination and being all out there.

After doing test patches all over the house, I've doubled the strength of the Antique to give a greater contrast but there it is, essentially it is all just white.

This is the look i am going for - THIS IS NOT MY HOME!  It has surfaces that are uncluttered. 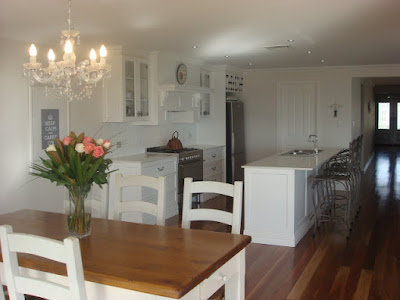 You can see the the darker floors (similar to our dark bamboo floors) and the contrasting white furniture. All our furniture is stained wood at the moment, so we are looking at doing the same thing and taking the top off the dining table, paint the base and chairs white, and then re-stain the top to match the floors.   Like this example, our house is quite dark inside due to having pergolas on both sides.  The windows are letting in filtered light rather than direct.  So white was the obvious choice.  I'm hoping to incorporate a few reflective surfaces (mirrors and shiny things) around the house to bounce the light around as well.  A skylight would be nice but probably too expensive.  I will however, put a solar tube down the corridor which is like the Black Hole of Calcutta (which happens to be the subject of one of the docos i watched). 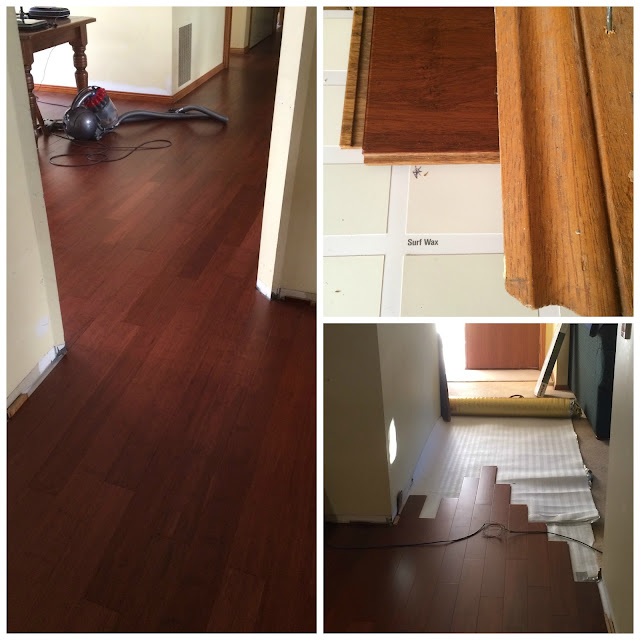 Our walls at the moment are a shade of yellow and very 1990's.  It was all the rage back then.  For the moment we are keeping the stained skirting boards because they match the architraves around the windows and doors.  We can paint them Vivid White later if it doesn't work.

Anyway, that's what has been keeping my mind busy without actually doing anything until now.

Christmas came and went and the biggest thing that comes to mind is that Doris came to spend the day with us on Boxing Day.  So, i hear you think!  Doris (my MIL) hasn't been to our home (or any other) in over 10 years.  It was great and a surprise for Rob so when he came into the family room and saw his Mum sitting at the table it was very emotional, for all.  Thank you so much Doris and thank you also to Glenda for going to get her and kidnapping her for the day.  We hope to make this a monthly event. 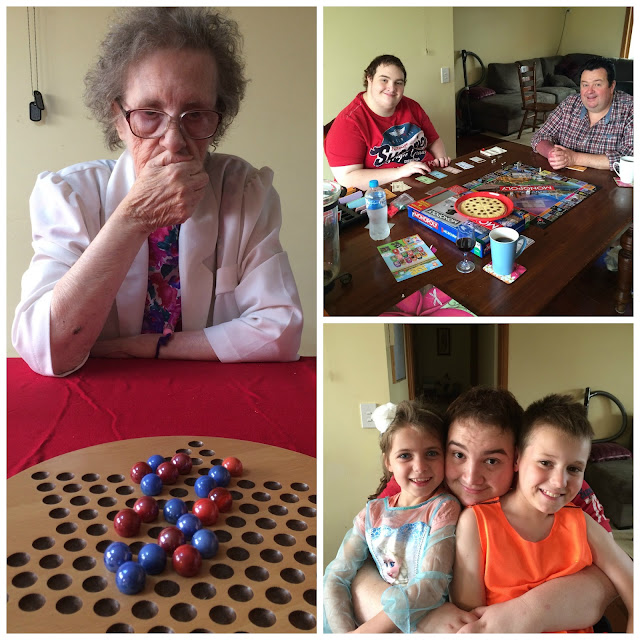 We go all out at Christmas, NOT, and our day was taken up with board games (New Melbourne Monopoly) and a competitive game of Chinese Checkers.  Rather than have a big roast meal we shared lots of our favourite things to nibble throughout the day which included home-made baked Christmas fair from Veronica (shortbread rounds, fruit cake and mince pies).  Glenda, Bell and the kidlets joined us for the day.

In January, I went to spend a weekend with Doris in Templestowe (while Trev and kids went away) and we busied ourselves getting out and about.  We joined friends at Beasleys Nursery on the Saturday and then the next day went with Glenda to Rivers of Yarrambat.  Doris knows that when I'm around, she's got to be on her toes.  We have a bucket list to get through.  While i was there we actually watched the film. 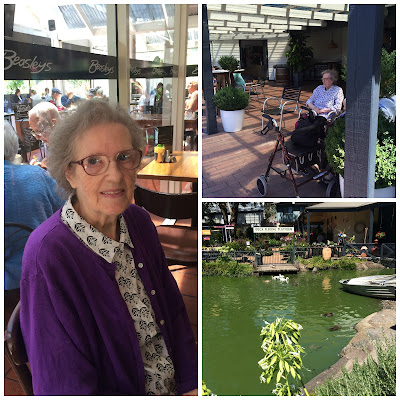 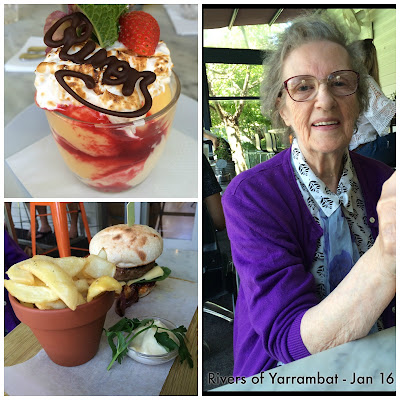 You might remember that i was planning a holiday get-a-way for Doris this year.  Next weekend Doris, Glenda, my bestie, Kerrie and her friend Helen and I will be driving to Lakes Entrance to stay at a beautiful home overlooking the lakes.  The weather is expected to be a mild 24 degrees and i see lots of chatter, reading, laughter, great food and daily outings in our near future.  There is also a private pool for us to venture into.  Doris has a critical wound on her heal courtesy of poor care in hospital when her hip was fixed and she cant go in.  I plan on putting her into a blow up ring and pushing her around.  You can just picture it cant you. Bum down and legs akimbo. Its going to be awesome.  One 82 year old (with nothing to lose) and 4 X 50 somethings (let off the chain) in one 5 bedroom house.  Come 2 am there will be a lot of traffic at the bathrooms. LOL


The garden has been doing its thing without too much assistance from the resident gardener (she's on the couch with air con remember) and it only goes to prove that it doesn't need too much attention.  In fact, my garden is fairly thriving on neglect.


It has been a very hot summer this year and I'm very thankful for that bank of solar panels up on my roof that's allowing us to run the air cons during the day.  Its been even hotter up home in NSW.

Given that I'm fair skinned with red hair and zero tolerance for any UV, you can see why I've spent a lot of time inside.  On the few days i did try to garden, i could feel the sun burning by 10am.

When we have managed to get out and about we have tried to get down the coast where it is always a bit cooler.


I do have much more to tell you, in particular about Tom so stay tuned.


Thanks for Visiting Living In The Land Of Oz.