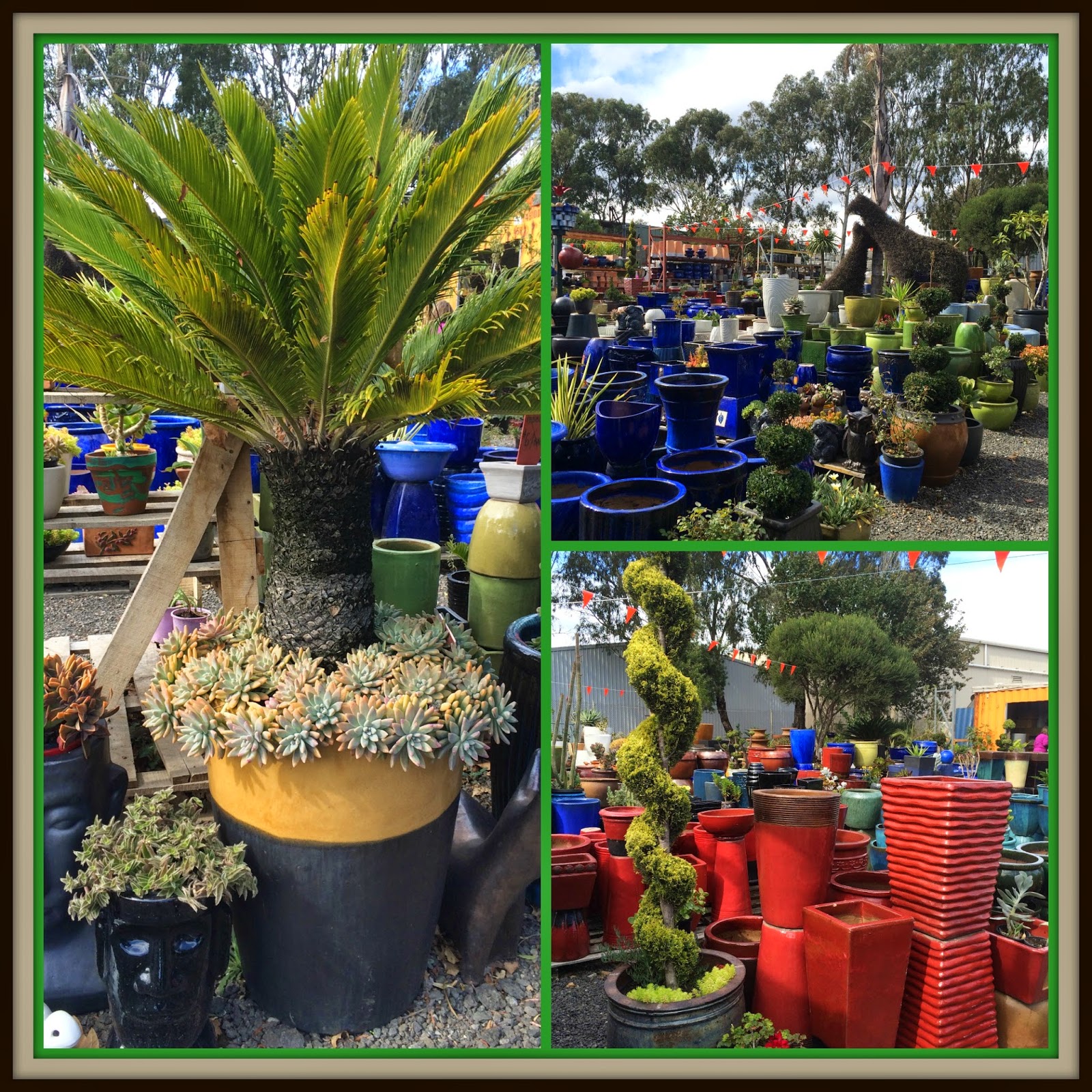 Nope, I'm not on a holiday in jolly Ole England, I'm in the western suburbs of Melbourne and about 2 min from my work in West Melbourne.  Tom and I drove through this industrial sector after having picked up the work ute and made our way to the depot where his new mattress was ready to be picked up Saturday morning.   Out the front, between two rather ugly factories,  were two big red SALE flags that caused me to turn my head to the left (imagine comical speed) almost giving me a crick in my neck.  What was on sale?

There they were, pots and pots and pots and pots of all colours and sizes just waiting for me.  It was like pot nirvana.   No time now, we were on a mission.  That's not to say however that when i returned the ute an hour later, on my own, that i didn't call in for look.

So, was this impulse buying and blatant consumerism gone mad.  Was I  lured by those big red flashy flags or the word "SALE"? Was i a victim of my own love of pots?  Probably, but i just happened to need a specific size that i didn't have already.  Honest!

Besides, i won Tattslotto this week.  I don't normally pay $12 for a piece of paper that goes in the bin but sometimes it seems that you are surrounded by people in need and my desperation led me to buy such a piece of paper in the hope i can FIX everyone's problems.  - no lectures please. 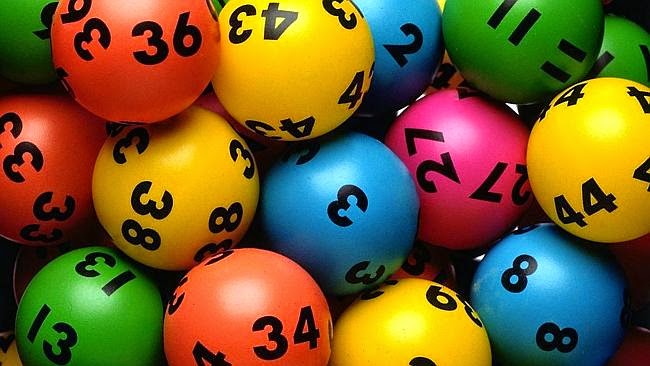 Actually, I've had a small win for three weeks in a row.  I'm on a roll.  I only paid $12 for the first ticket and they keep funding the rest.  This week however i won $160 and so its coming out of Tattslotto's bank account and into mine.  I'm a fully funded pot shopper.

During the week i used one of the contacts i had made by placing a FREE plant ad on Gumtree to get rid of the rest of the clumping cliveas in my side garden.  I think they are beautiful but not in the ground.  They take over when they have their ideal growing conditions. 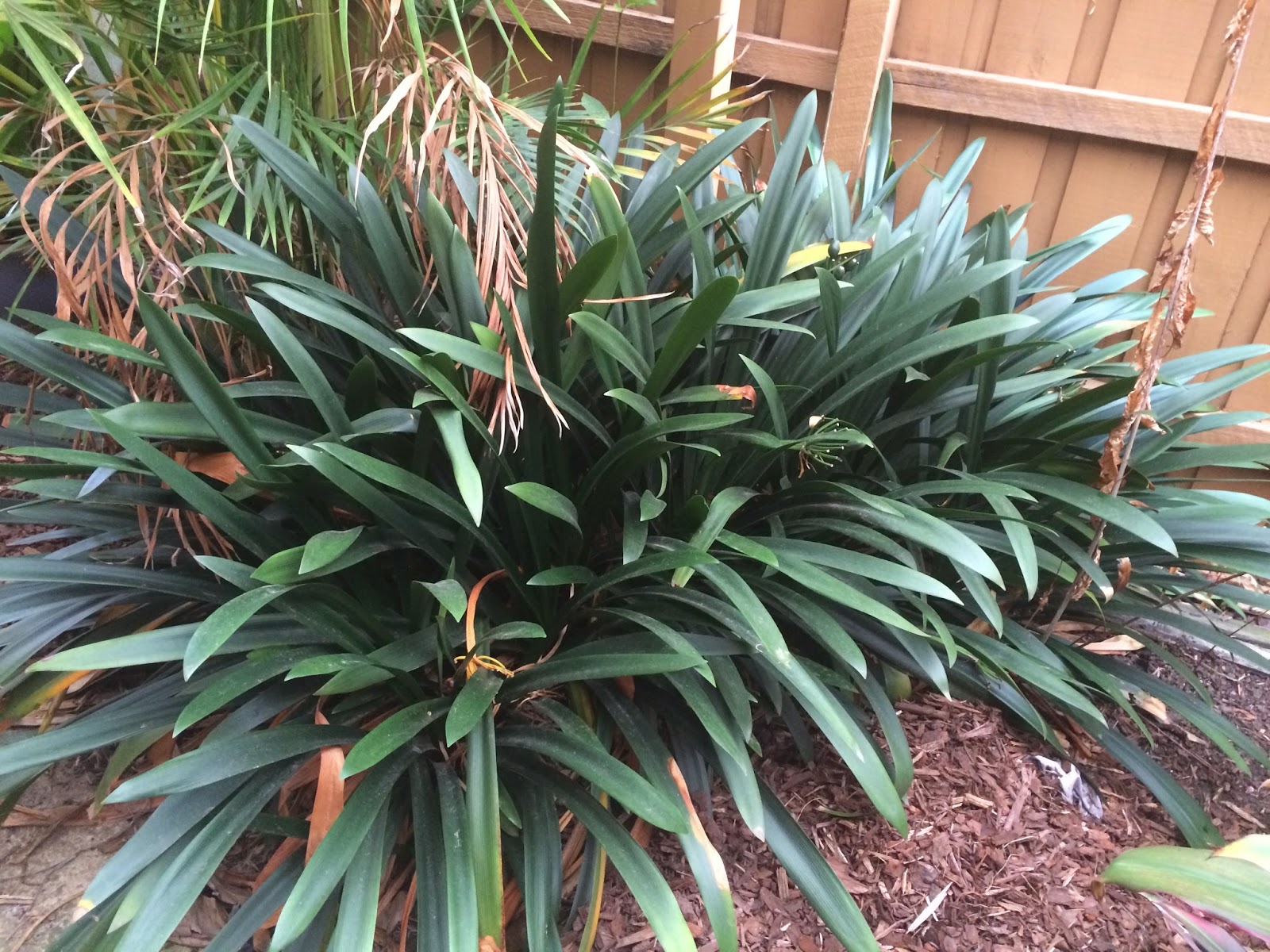 At 7am (lucky I'm an early riser) an older gentleman who loved to talk (way too much at that time of the morning) arrived to dig them out and take them to a lady friend with a farm in need of greening.   I asked him to leave me several to put in a pot.  So, there you have it.  I needed a pot.  Not just any but since it would be instantly on show as you stepped into our front room through the side window (now naked of shear curtains).  It had to be beautiful.

Am i justifying my purchase too much?  Why do I think I need too?  Oh dear, more therapy needed.

What a find.  Not just the merchandise but the loveliest Vietnamese couple I've had the pleasure to meet.  I was offered a cup of tea on my arrival.  Hello?   I was given space to browse but also advice.  I was picky, I took my time, I was (a pain in the arse) changing my choice over and over but she smiled very politely and sought out any request i had, often offering cheaper pots.  I think she could recognise a fellow pot lover. Great customer service. 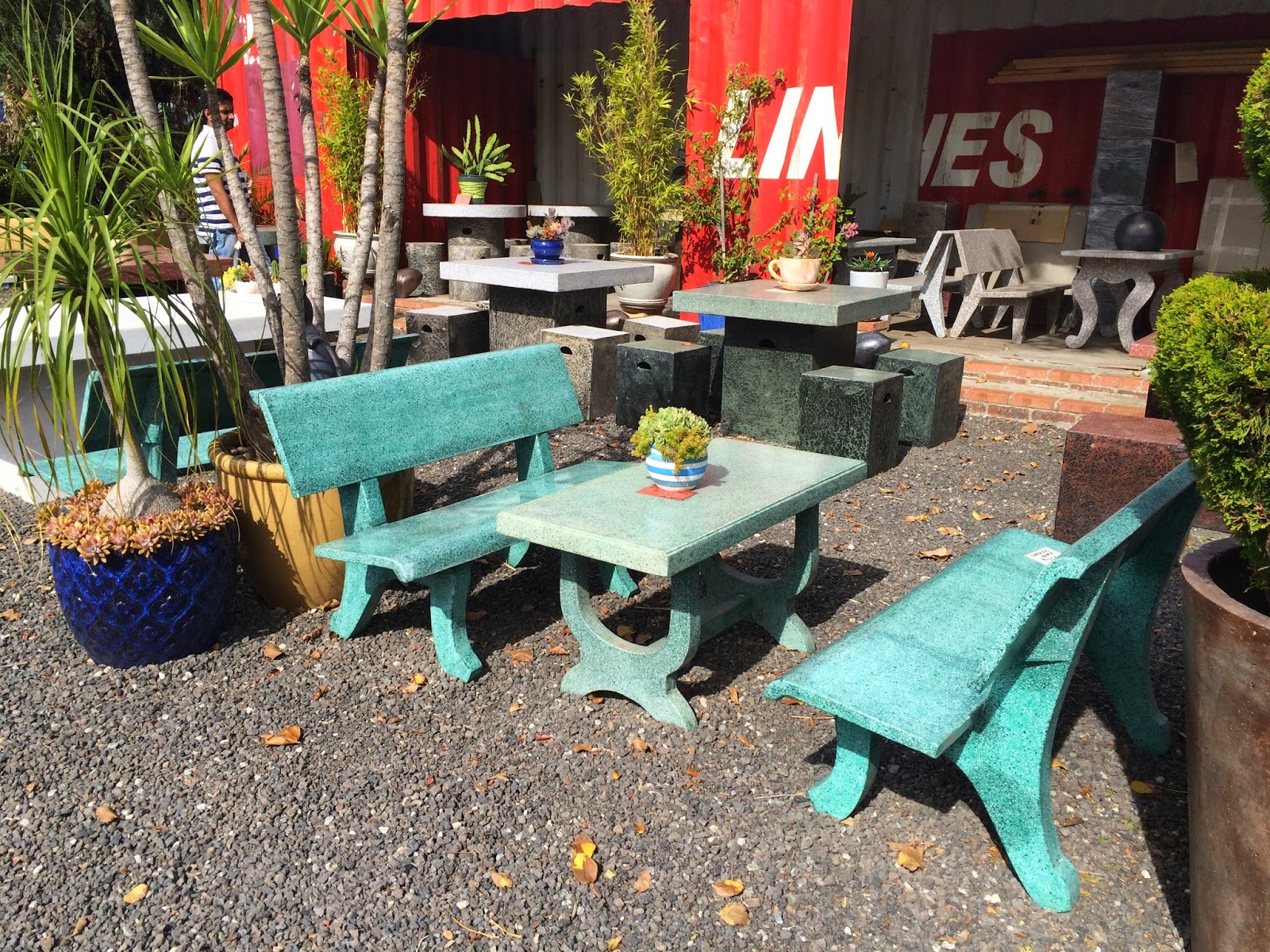 Speaking with her husband later i discovered it was their 2nd anniversary of business that day and so as i do, i started asking all those business questions that accountants love to ask.   I applauded them on their success as so many small businesses fail in the first two years.  With a history of being a machinist and then a landscaper i could see many examples of his handiwork in the healthy plants in well placed beautiful pots. Great advertising. 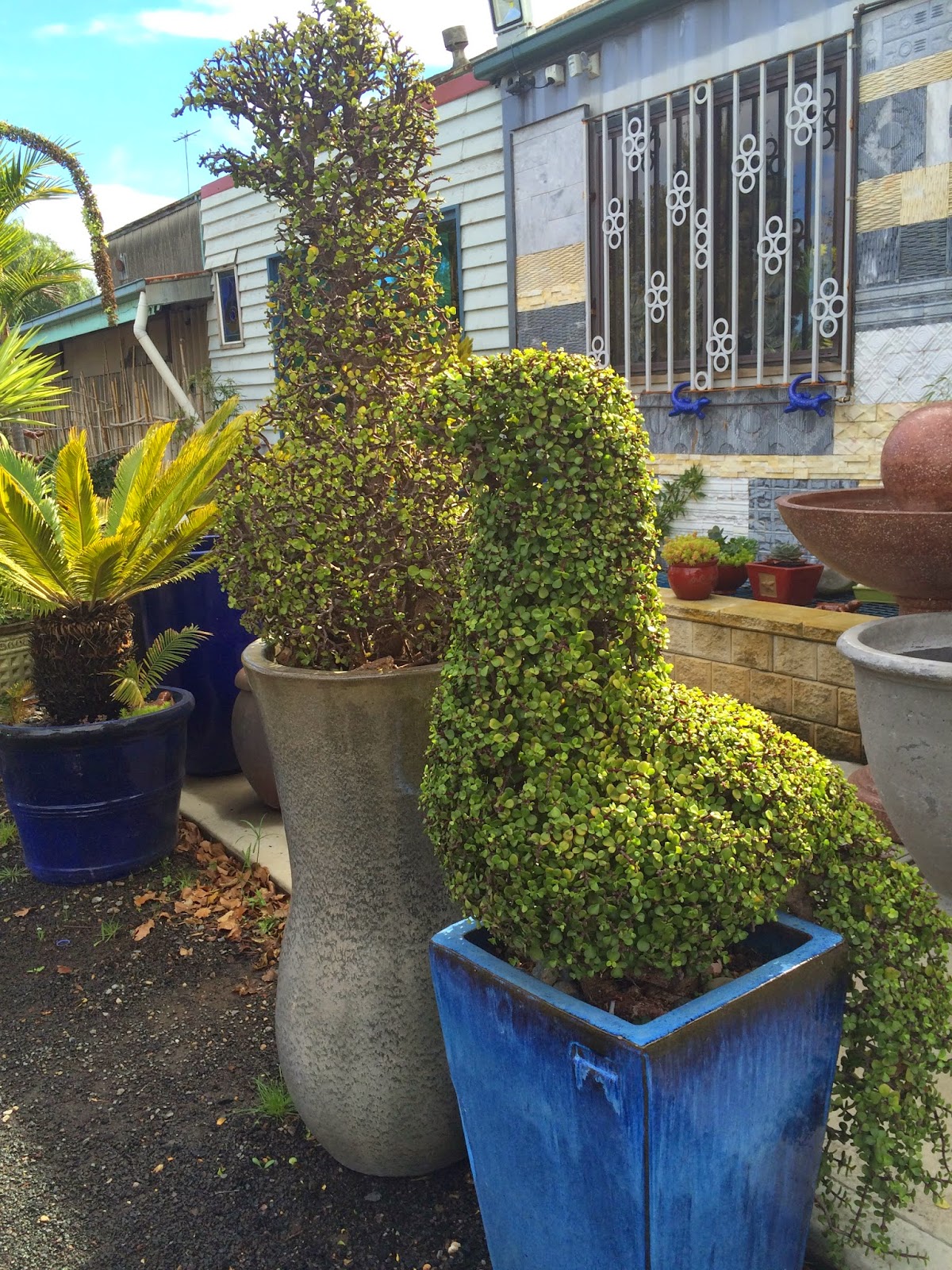 The traffic of customers was steady while i was there and they seemed to have a good rapport with most, greeting them as friends.   The prices were extremely cheap in comparison to larger chain stores.  Looky here..... 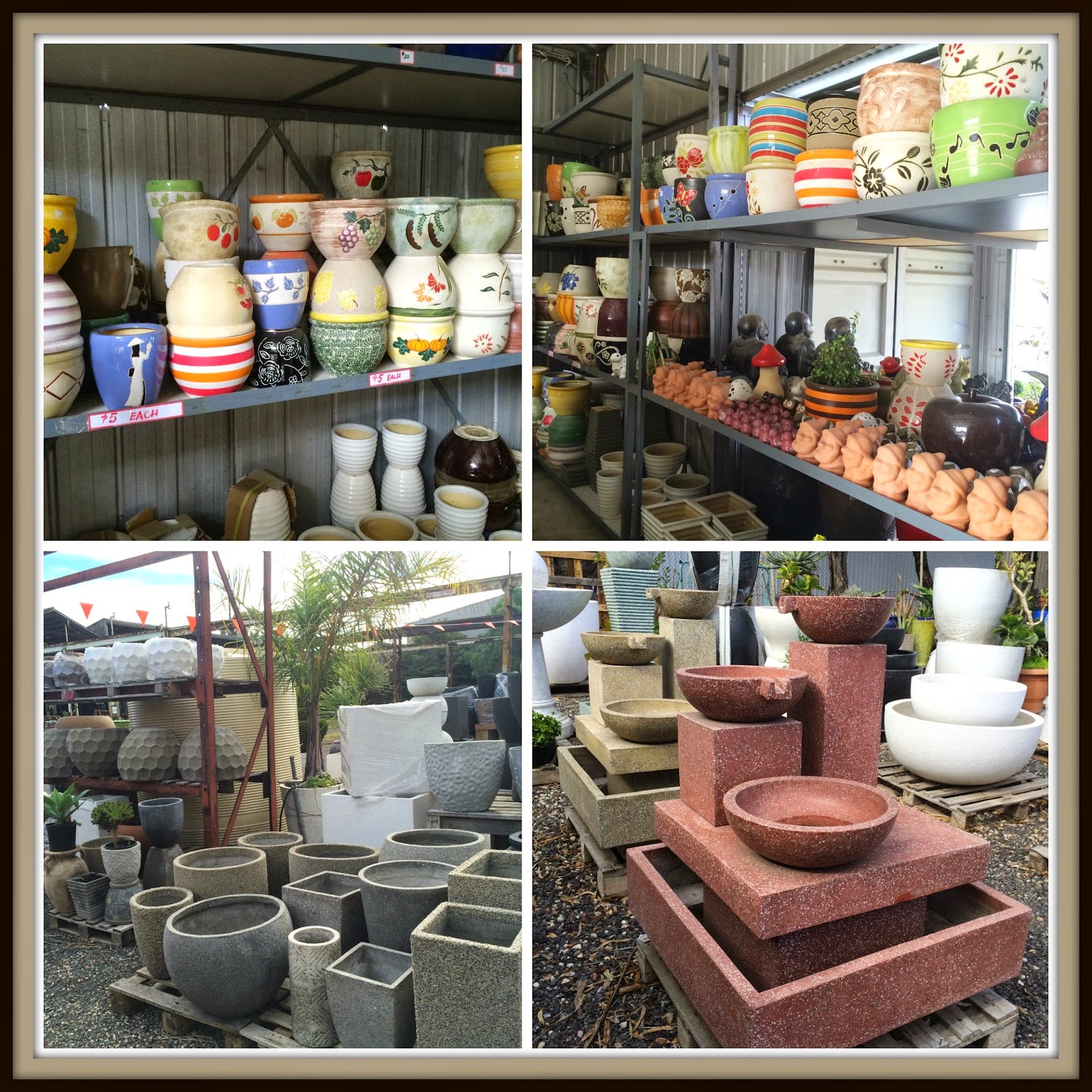 Those decorated pots in the top left were only $5 each!!!!   The larger on the top right only $15.  So many designs to suit everybody.

I thought it very clever that they arranged the pots in waves of colour.  If you are shopping for a pot you usually have a particular colour in mind.  From greens to blues to reds to grey and that very boring neutral colours that are all the rage now. 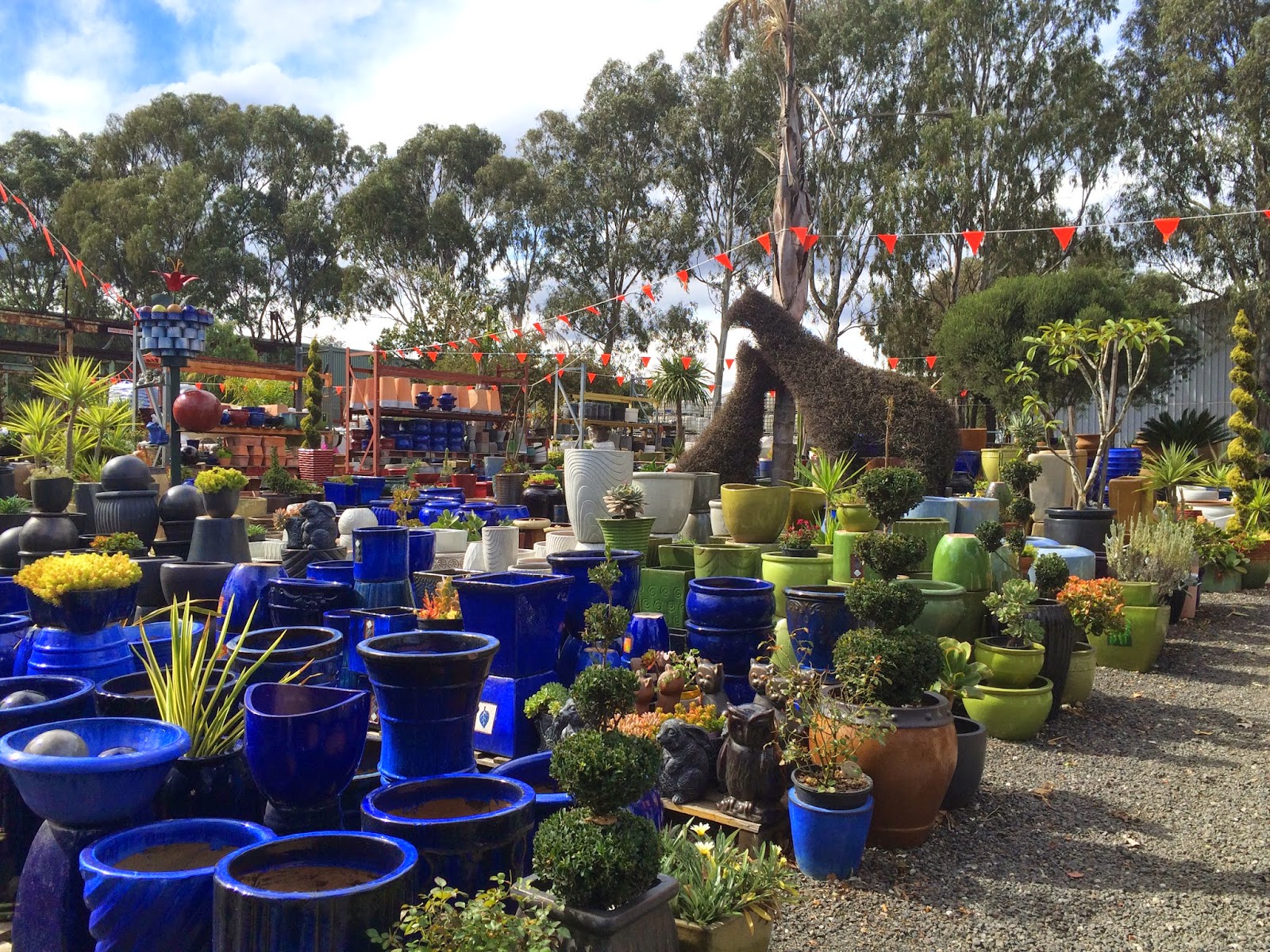 They also have a few eco options around and sell their own potting mix.

OK, so i think you get the message.  This place is a find.  No website i can find but here is their business card.

Oh, if you want to know what i bought (why wouldn't you) then you'll have to wait for the next post where i spent my weekend making over the side garden.


Thanks For Visiting Living In The Land Of Oz